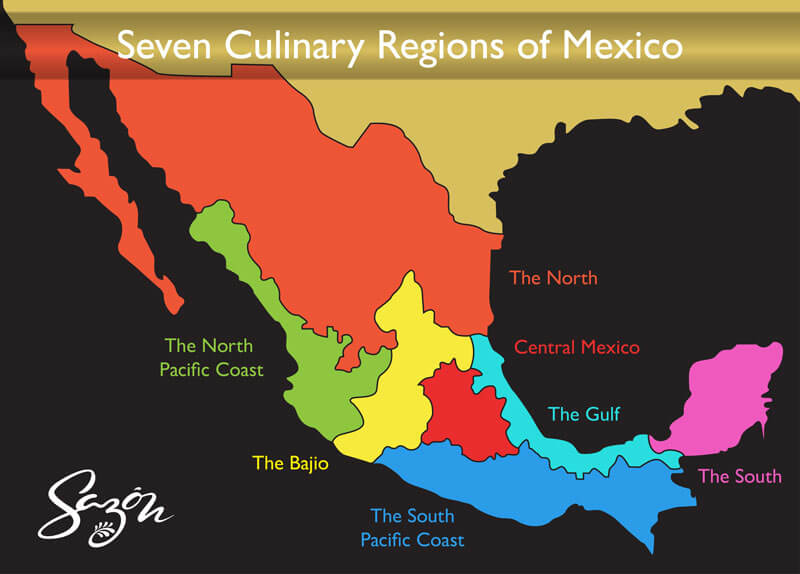 While tacos are synonymous with Mexican food, it is a gross injustice to reduce an entire culture’s cuisine to one dish. But the good news is, if you’re a taco fan, you’re just as likely to enjoy the other big and bold flavors that are part of Mexican cuisine.

Mexico’s food landscape is just as vibrant and varied as its geographical features, indigenous people, and history. The food traditions of each region have distinctive characteristics due to the differences in locally grown crops and spices indigenous to the area, giving us hints of where these dishes originate.

The seven culinary regions of Mexico can be identified by their very distinctive styles of food and drink.

Northern Mexico or “El Norte” is a vast area covering almost 2000 miles. Ranching being the most common occupation in this region means the food traditions reflect the same. Expertly grilled meats and different types of cheese production are an important part of the cuisine from this region. Popular dishes include cabrito (roasted baby goat meat), guacavaqui (beef stew), machaca (dried and spiced beef or pork), burritos, and carne asada. Plus, the widest variety of Mexican cheese comes from the north, including queso fresco (fresh farmer’s cheese), ranchero, cuajada (a mildly sweet, creamy curd), requesón (like ricotta), Chihuahua’s creamy semi-soft queso menonita, and many varieties of smoked cheese.

The majority of the country’s fresh produce comes from this region. The kitchens showcase this beautifully by including an abundance of fruit, vegetables, grain, cheese, and chiles. Plus, the long coastline means seafood is easily accessible and very popular. There is a preference for cooking seafood with European spices along with chile peppers and serving it with spicy salsas.

The Guadalajara area is considered the region’s cultural and gastronomic center. The most well-known dish from this region is called birria, a stew of beef, mutton, or pork with chile peppers and spices.

Other popular dishes from the region include fish tacos and aguachile (fish or shrimp cooked in lime juice).

Very similar to the central Spanish plains, the Bajio region was home to the first European settlers who brought the traditions of using rice, pork, and spices in their cooking. Morisquesta (a sausage and rice dish), carnitas, and deep-fried pork are the most popular dishes that come from this region. Cotija cheese comes from the Bajio region, and they also have some popular indigenous sweet treats, like cajeta (goat’s milk caramel), chongos (curds in syrup), arroz con leche (rice pudding), and bunuelos (fritters).

Covering the areas of Oaxaca, Guerrero, and Chiapas, this region is full of deep valleys that have stayed indigenously popular and feature Mexico’s rich provincial cuisine. Oaxaca is known as the “land of the seven mole.” Chocolate is often used in their cuisine and is sometimes mixed with almonds and cinnamon to make a special drink.

Central Mexico is home to Mexico City. Given its cosmopolitan nature, this area offers food from all the different regions in the country. Street food is trendy here, and it is easy to find some authentic tacos and tortas if that’s what you crave. Popular foods in this region include barbacoa (from central highlands), birria (from western Mexico), cabrito (from the north), carnitas (from Michoacán), and mole (from Puebla and Central Mexico). Central Mexico is also home to Puebla, a mole hometown. Their cuisine is diverse, with a variety of indigenous and Spanish-influenced ingredients. Puebla’s most famous dishes are tortas (sandwiches) and mole poblano.

Home to Tabasco and Veracruz, this region is steeped in indigenous, Spanish, and Afro-Caribbean influences. The European settlers brought spices like parsley, thyme, marjoram, bay laurel, and cilantro, which form an integral part of the cuisine from this region. The region also has a lot in common with Caribbean food. Tabasco is known for more than the ubiquitous hot sauce. Tabasco seafood cuisine is unparalleled, with several distinct species of crab and crayfish found here. Additionally, rice, citrus fruit, pineapple, olives, olive oil, and capers are also popular ingredients. In exchange for all the beautiful foods and flavors they have adopted, what this region gave to the Europeans who settled here was vanilla, which grows locally.

Covering the Campeche, Yucatan & Quintana Roo areas, this region has strong food influences from Mayan traditions. It also draws inspiration from Cuba and other Caribbean islands, Europe, Asia, and Middle Eastern cultures. Annatto seeds, called achiote, are the most often used spice in this cuisine. The seeds give the food a red color and peppery taste, with hints of nutmeg. Tropical fruits such as tamarind, plums, avocados, and bitter oranges are often used to make the unique salsas popular in this region. The south also has a tradition of wrapping meats and vegetables in banana leaves and cooking in a pit oven. This cooking method is called Pibil, which comes from the Mayan word ‘pib’ - meaning buried.

Experience the Authentic Flavors of Mexico at Sazón

If reading about the vast and varied options provided by Mexican cuisine has intrigued you or made you just plain hungry, call us today at (303) 627-5741 to make a reservation at Sazón! Our menu features key dishes from all over Mexico, and we’d be happy to share the Sazón Mexican and Latin Experience with you!

We welcome you to our table!

Get In Touch With Us

Newsletter
Sign up for our newsletter & receive exclusive offers and invites!

This website uses cookies so that we can provide you with the best user experience possible. Cookie information is stored in your browser and performs functions such as recognising you when you return to our website and helping our team to understand which sections of the website you find most interesting and useful.

Strictly Necessary Cookie should be enabled at all times so that we can save your preferences for cookie settings.

If you disable this cookie, we will not be able to save your preferences. This means that every time you visit this website you will need to enable or disable cookies again.